This public workshop, held at Maastricht University in cooperation with CEPS and EUI, took stock of recent trends in EU-Asia relations and showcased recent publications stemming from the EU-Asia Security and Trade (EAST) Jean Monnet-funded project as well as EUI’s own EU-Asia Project. 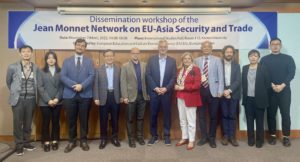 This workshop took stock of recent trends in EU-Asia relations by showcasing current publications stemming from the EU-Asia Security and Trade (EAST) Jean Monnet-funded project as well as EUI’s own EU-Asia Project. The workshop examined the growing economic and security relevance of the Indo-Pacific to European interests, as well as the growing cross pollination between security and economics. Finally, the workshop assessed the likelihood of a sustained EU intervention in the region amidst Russia’s war in Ukraine, energy and food crises and the spectre of stagflation. This event was co-organised with the Istituto Affari Internazionali and Maastricht University.

The fourth conference of the EAST network took place in Melbourne on 30-31 January 2020. The event was organised by the University of Melbourne and gathered together the autors of the volume on trade relations between the EU and South-East Asia and the Pacific.

The third conference of the EAST network took place in Rome on December 20219. The event was organised by the International Affaris Institute (IAI) and hosted by the Luiss University. This workshop brought together the contributors to the volume on EU Security Relations with  Asian Powers. It provided an opportunity for authors to present draft chapters and receive feedback from editors, other contributors and invited experts.

The second conference of the EAST network took place in Singapore on April 2019, and was hosted by the S. Rajaratnam School of International Studies (RSIS). The conference gathered participants to both trade and security projects based in the Asia-Pacific to discuss drafts and coordinate the next steps.

The first conference of the EAST network took place at Stiftung Wissenschaft und Politik (SWP) in Berlin 17th-18th January, and gathered participants from the European side of the project to discuss progress in writing and to coordinate the coming work.