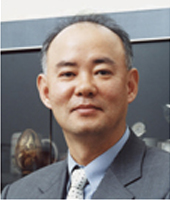 Park Sung-Hoon earned his Ph.D. degree in Economics from Technical University of Berlin, Germany in 1993, and has been Professor of Economics and International Trade at the Graduate School of International Studies (GSIS), Korea University since 1997. Professor Park has served Dean of both GSIS and Division of International Studies (DIS) during March 2011 – February 2013. He worked in the university headquarters as Vice President for Planning and Budget in March 2007 – January 2008, as well. Sunghoon Park has held research fellowship at Korea Institute for International Economic Policy (KIEP) during 1993-1997, and visiting professorships at Macau Institute of European Studies (2000 – 2014), Ritsumeikan University (2003) and ASEF University (2000, 2004), etc. For 2003/2004 academic year, he was awarded a Fulbright Visiting Scholarship to the Graduate School of International Relations and Pacific Studies (IR/PS) at University of California, San Diego, United States. Professor Park was awarded an Erskine Visiting Fellowship from University of Canterbury in Christchurch, New Zealand (July – September 2010), and took a Visiting Professorship at the Department of East Asian Studies at University of Vienna in Vienna, Austria (October 2010 – January 2011 and again in April-May 2018).

Professor Park has been conducting researches primarily but not exclusively on issues of international trade and investment policy, including WTO rules, European and Asian economic integration, and Korea’s external economic policies. He also published two books and several academic papers on North Korean economy and inter-Korean unification issues. Professor Park has provided policy advisory services to the Korean government and the APEC secretariat for the past 25 years. For the academic society of Korea, he served President of Korea Association of Trade and Industry Studies (KATIS) in 2007, the EU Studies Association of Korea (EUSA-Korea) in 2009 and the Korean-German Academy of Economics and Management in 2013-2014. He was also President of Asia-Pacific Association of EU Studies in 2015.